Looking For The Best Place To Retire For Positive Aging? You’ve Found It!

Once again, Gig Harbor has earned a top spot among the country’s best places to retire. Based on factors that help determine the quality of life for retirees, such as tax-friendliness, medical care and social opportunities, an analysis by the financial planning website SmartAsset™ ranked Gig Harbor as the best place in Washington to retire — and the number four place in the entire U.S.

That doesn’t surprise us, of course. Gig Harbor routinely places at or near the top of such lists. For financial stability and healthy living, it’s hard to beat our hometown.

The natural beauty of the area draws people of all ages to Gig Harbor, and the profusion of year-round outdoor activities appeals in particular to those who know that being active is a key to staying healthy as they get older. Heron’s Key is a natural extension of this active peninsula community, making it a great place to live — by design.

What We Mean By Positive Aging

You’ve heard the saying “age is just a number,” right? People who can truly embrace that philosophy seem to have a knack for more fully enjoying their retirement years.

They don’t let the number of their years dictate what they “should” do or how they’re “supposed” to feel. Instead of dwelling on limitations (real or perceived), they focus on the advantages that come with retirement, such as more time for a favorite hobby or interest, and more opportunities to be with family and friends.

One of the leading health systems in the Seattle area, Providence Health, offers five tips for healthy aging:

You don’t have to be a workout warrior to reap the benefits of exercise. Even 10 minutes of a physical activity that raises your heart rate, done a few times a day, can make a difference.

Give your brain some exercise, too. If you’ve always wanted to learn to play a musical instrument or speak another language, go for it! Not ready to tackle something quite that ambitious? Take some classes on topics that interest you.

As Providence notes, “looking for the good in every situation can reshape the mind.” If this doesn’t come naturally, make it a point to find people and things that inspire you and make you laugh.

Pay attention to your health. Be proactive by scheduling preventive screenings and annual physicals. Listen to what your body is telling you — and follow through.

In the last year and a half, we’ve all seen how important it is to maintain our relationships with friends and family, even if we have to find creative ways to do so.

Living in a community like Heron’s Key makes it easier to do all of the above. You don’t have to take our word for it, though. We talked with some residents here at Heron’s Key to find out what they like best about our community and Gig Harbor. Read on to see what they told us.

Dan and Lois Wilson moved to Gig Harbor in 1996 and have lived at Heron’s Key for three years. Although they both grew up in the Pacific Northwest, they’ve lived all over the world, including South Africa, England, the Philippines and Hawaii. 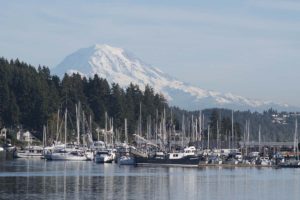 Dan described their first trip to Gig Harbor: “We came across the bridge on a beautiful July day. The Sound was just like glass, beautiful. There was snow on the Olympic Mountains. We drove into the harbor and said, ‘This is it!’ We just knew this was the place.”

Along with the natural beauty of the area, Dan said they were attracted to Gig Harbor because there are so many things to do here — boating, fishing, paddle boarding, kayaking, skiing and “maybe the only authentic Italian gondola ride on the West Coast,” to name just a few. He also mentioned the beautiful hiking and walking trails. “One of the prettiest is just around the harbor,” he noted.

While the Seattle area is known for coffee, Dan pointed out that Gig Harbor has a number of popular microbreweries along the waterfront with tasting rooms. The downtown area also features a mix of locally-owned restaurants where you can stop for a beverage or lunch, and there are always events that people look forward to attending in Gig Harbor as well.

“The Rotary Club puts on a Sip and Stroll evening, where you can stroll along the shops with a glass of wine and meet the shopkeepers,” he said. Harbor Hounds is another event the Rotary Club organizes, where hundreds of people bring their dogs to the waterfront area for a day of fun.

Seattle is about 45 minutes away and, according to Dan, taking the ferry ride across Puget Sound is “a nice way to get back into a big city, if you want, with all the activities there.”

Lois said living in Gig Harbor is “kind of the best of both.”

“When you pass people on the street, they make eye contact and nod or wave. And, yes, the big city is just across the bridge, Tacoma or Seattle,” she said.

Dan brought up their desire to travel as another reason they decided to make Gig Harbor their home. Seattle-Tacoma International Airport is about 45 minutes away, and there are trains to California and the Midwest that depart from Seattle.

The Best Place To Retire For The Wilsons

“Before choosing Heron’s Key, we looked at Sedona, Arizona; Santa Fe, New Mexico; Sequim [Washington] and Costa Rica. We just kept getting pulled back to Gig Harbor,” he said. 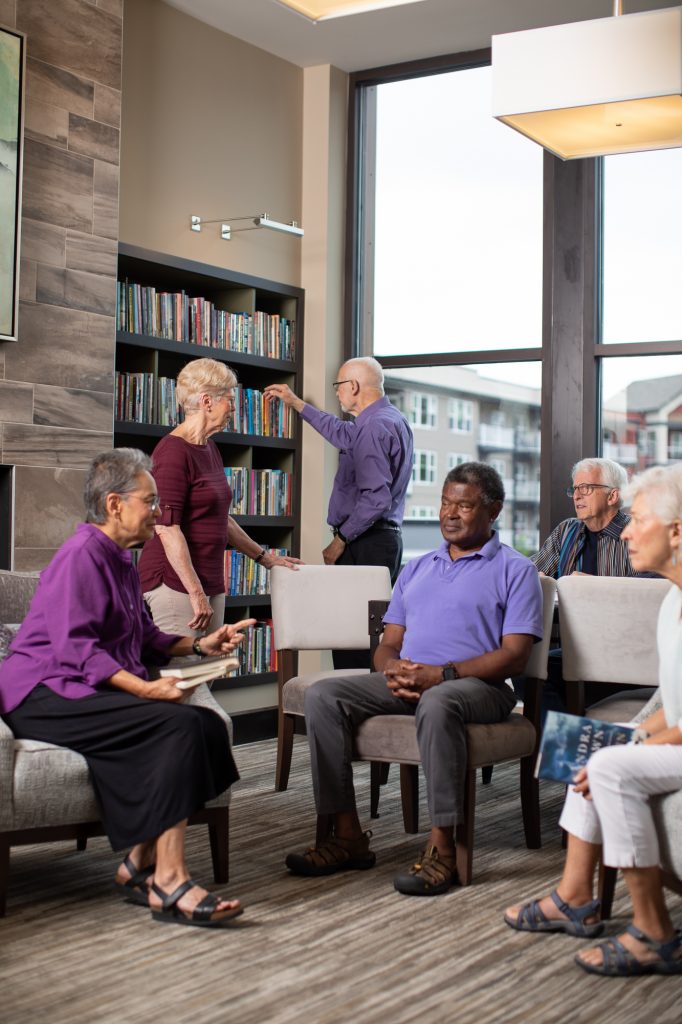 After joining us, Dan and Lois found their own unique ways to be part of the Heron’s Key community.

“We didn’t come here to fade away,” Dan said. “We came here to be actively engaged.”

One way they stay engaged is through the lifelong learning opportunities at Heron’s Key. For example, Dan has been taking an eight-week course on the philosophy of religion that a professor from the University of Washington is conducting via Zoom.

Lois also serves as a Resident Ambassador, meeting with people who are considering moving to Heron’s Key. Recently, she met with couples from as far away as South Carolina and New Mexico.

“I love talking to people about making this transition and giving them the basic information that they need to consider no matter where they go,” she said.

Once a week, Dan, who’s a retired pastor, joins another resident who is also a retired pastor, and together they hold a short nondenominational ceremony at Penrose Harbor for residents who aren’t able to attend their usual place of worship.

Lois said she went with them to Penrose Harbor recently and visited her friends in the assisted living, memory care and skilled nursing areas. The visit also reminded her of an important advantage of living at Heron’s Key.

“Penrose Harbor is peace of mind, in my book,” she said, “because if one of us needs that next step, it’s just down a corridor.”

De grew up near Seattle, so she knows the area quite well. She and a friend decided to put a deposit down on their homes at Heron’s Key back in 2013, four years before the community opened.

When asked about her favorite things to do, she said she plays cards a lot, including euchre, bridge, pinochle, and hand, knee and foot. She also “walks the ponds” every morning, referring to the retention ponds adjacent to the community.

“It gets me out in the morning for some fresh air,” she said. For now, the path surrounding the ponds is gravel, but a project is underway to create a nature sanctuary around the ponds, with paved surfaces to make it more accessible to people who use a walker or a wheelchair.

Where Do the Locals Go?

There are dozens of other beautiful trails and parks in and around Gig Harbor, making the area an exceptionally great choice for anyone who loves to get outside for a walk or a bike ride. De noted that Cushman Trail, which is all paved, is nice for biking, and Sehmel Homestead Park, with its 98 acres of forest, wetlands, meadows and grassy areas, offers a variety of trails for walking, biking and hiking.

De said one of her favorite walks is along the waterfront in downtown Gig Harbor. She likes to take the trolly from Heron’s Key to the downtown area, go for a stroll and have lunch at one of the local eateries.

There are plenty of beaches in and around Gig Harbor, too, like the ones at Sunrise Beach Park, Kopachuck State Park and Penrose Point State Park. You can go for a walk along the beach and have a picnic. Or, if you have a boat — as several residents at Heron’s Key do — you can take it out into the water and maybe even do a little fishing.

De likes to play bocce ball, too, and there’s a court within walking distance of Heron’s Key where she and other residents can play. She also likes the concerts at Skansie Brothers Park in downtown Gig Harbor during the summer months.

“You can take your chair down and watch the band,” she said. “People dance. It’s a fun way to pass the night.”

Just across the bridge, in Tacoma, there are lots of other options for entertainment and recreation, including the theater and baseball games at Cheney Stadium. Point Defiance Park, which is situated on 760 acres, has a zoo and aquarium, beautiful gardens, beaches and trails.

De said the ferry rides are fun, whether you’re going from Tacoma to Vashon Island or from Bremerton to Seattle.

In Seattle, you’ll find even more to do and see. For instance, De and many other residents at Heron’s Key enjoy attending performances by the Seattle Symphony. Earlier this year, De went to the Klondike Gold Rush National Historical Park in Seattle and then had lunch before heading back home to Heron’s Key.

Go just a little farther and there are vineyards and mountains and other places to explore. De said she was getting ready to take a trip with some friends to Leavenworth, a Bavarian-style city that’s about three hours away, in the Cascade Mountains, and they’re going to go tubing down the Wenatchee River.

Like the Wilsons, De has done a lot of traveling. She’s been to nearly a dozen countries in Europe, as well as Scandinavia, Hong Kong, Macau and the China Sea area, including Singapore, Bali and the Philippines, Australia, New Zealand, Cook Island and Tahiti. She has also taken cruises to Alaska and South America.

She’s always happy to get back home, though: “I’m contented right here. This is wonderful.”

Wondering If Heron’s Key Is The Best Place To Retire For You?

Take a closer look at our community. We think you’ll like what you see.

A convenient way to learn more about Heron’s Key is to follow us on Facebook, where we share photos of the fun and active Heron’s Key lifestyle that promotes positive aging. Another way to check us out is to explore our gallery of videos and photos.

And, if you live nearby or plan to visit the Seattle area, we invite you to schedule a tour. We’d love to say hello in person!