It’s that time of year again—time to get out and enjoy all there is to do in and around Heron’s Key and Gig Harbor. Whether you want to be an active participant or you’re perfectly satisfied as a spectator, there are plenty of activities and outdoor recreation options to choose from throughout the warmer months.

Residents at Heron’s Key who want to stay within the community can engage in a friendly game of croquet, lawn darts, badminton, cornhole or ladder toss. Plus, we hope to start offering our morning outdoor fitness classes with Becci Crecelius again in a few weeks.

For those who want to venture just a little farther, the nearby hiking trails, parks and bocce ball courts are popular choices. Cushman Trail, a paved trail that runs the length of town, is easily accessible from Heron’s Key and is a favorite for pedestrians and bicyclists alike.

Take The Trolley Into Downtown Gig Harbor—& Uptown, Too!

The Gig Harbor (Pierce Transit) trolley service is back this summer, starting on June 13. Residents at Heron’s Key can catch the trolley—which runs every 30 minutes—just outside the community’s entrance and ride into the downtown area to browse the shops and galleries along the waterfront, stroll around the Waterfront Farmers Market at Skansie Brothers Park and have a beverage or a bite to eat at one of the local dining venues. 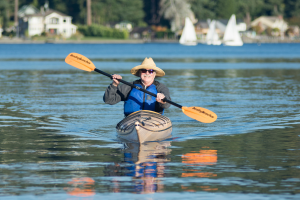 Usually, during the summer, there are festivals and other outdoor recreational events at Skansie Brothers Park, including a popular outdoor concert series called Summer Sounds at Skansie from late June through mid-August. Last year, unfortunately, the concerts and most other events were canceled because of the pandemic, and we haven’t heard yet whether they will resume this year.

The trolleys also go to Uptown, an outdoor mall and gathering spot on the west side of Gig Harbor that features a mix of retail establishments, restaurants and local merchants.

Any article about outdoor recreation in Gig Harbor wouldn’t be complete without a mention of the various harbor tours, cruises and even the gondola rides available here in our scenic seaside village on the peninsula. Those who are feeling more adventurous can rent an electric boat, a kayak or a standup paddleboard!

Heron’s Key has two events planned this month that will appeal to residents with a playful nature. The first is a scavenger hunt, and although we’ve had similar events at Heron’s Key before, this one has a twist!

“Our first clue starts on campus at Heron’s Key and takes the participants to a local small business in downtown Gig Harbor. There, they’ll find a clue to another small business, and so on, with 10 businesses in all,” said Abby Phillips, trips and events coordinator. “It was a lot of fun to set up!”

The scavenger hunt will run from June 7 to June 21. And of course, there will be a prize at the end.

The second event is in connection with Gig Harbor Rocks! If you’re not familiar with what that is, it’s a locally-based Facebook group that helps spread joy throughout the Gig Harbor community. People of all ages who live or work in and around Gig Harbor paint designs and scenes on small rocks. Then, they “hide” them around town, including at Heron’s Key. “Hiders” and “finders” often take photos of the painted rocks to post on the group’s Facebook page. Sometimes the people who find the rocks move them to another hiding place so someone else can find them. And sometimes, they like the rocks so much they keep them. If you’d like to see some pretty amazing examples of the rocks people paint, search for “Gig Harbor Rocks!” on Facebook.

On June 17, residents of Heron’s Key can showcase their creative skills (or come and admire their neighbors’ talents) at a rock-painting session on the patio of our Creative Arts Studio. Afterward, they can keep their creations or find the perfect hiding place to surprise and delight an unsuspecting spotter.

“It’s another fun way to see the town around the community,” Abby noted. 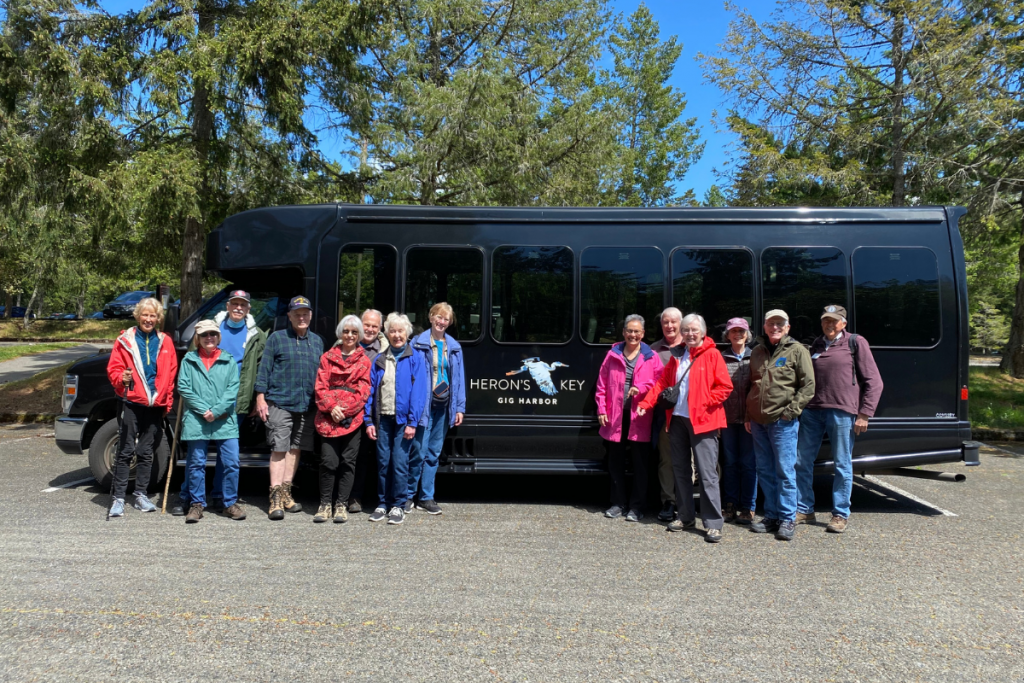 Many residents at Heron’s Key are avid hikers. Others just enjoy getting out for some fresh air and a little sunshine. Fortunately, a number of trails within a relatively short distance are a good option for nearly anyone who would like to take in the natural beauty of Puget Sound and the Olympic Peninsula.

“We’re starting our hiking back up,” said Chuck Abbey, one of our fitness specialists. “We want to make the hikes more accessible for everyone, so some of the paths that we pick, you can split off and do a paved route or one where the terrain is more uneven.”

During the month of June, we have several hikes planned that are less than an hour’s drive away, as well as a day trip to hike the Staircase Rapids Loop near Lilliwaup. Depending on how many want to go, we’ll take one or both of our larger buses. Residents always have the option of driving their own vehicle.

Speaking of taking the bus, it turns out that we have a lot of baseball fans at Heron’s Key. In the past, we’ve taken groups of up to 30 residents to see the Rainiers play at Cheney Stadium, which is about 15 minutes away, in Tacoma. Occasionally, we’ll go to a Mariners home game at T-Mobile Park in Seattle. We’re hoping to resume those outings in July.

We’re Here, Whenever You’re Ready To Get Going

As you can see, there’s no shortage of outdoor activities to enjoy during the warm weather season here in Gig Harbor. This makes Heron’s Key an ideal choice if you’re looking for an active independent living community to be your new home.

You can get a sense of what it’s like to live at Heron’s Key by exploring our gallery of videos and photos. If you like what you see, we encourage you to schedule a tour. Afterward, you could take the trolley for a stroll around downtown Gig Harbor. Some say the local flavor is at its best this time of year!